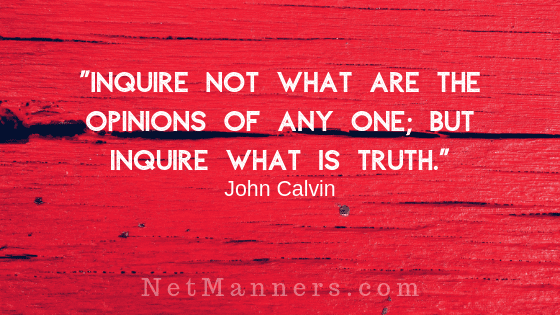 Political “discussions” are increasingly polarized. Unless the venue is known to be one where open minds can discuss topics as adults, everyone is just shouting at each other. I don’t know about you but it seems that things are getting nastier. And more visceral online with each passing day.

Which is a shame. I remember back in the day where regardless of the topic, informative and thought provoking discussions were held. I guess having an open mind was more prevalent in the past.

Because of this, increasingly I receive requests about how to handle certain situations involving political emails. Mostly from folks who do not want relationships or friendships marred because someone they know pushed their opinions in such a way that delegitimize those with opposing points of view.

How to Handle Political Forwards and Replies

You receive a forwarded email about a political issue, which has also been forwarded to a bunch of other people. Some who you do not know.

Is it proper for you to share your contrary opinion and hit the “Reply to All” button? After all it was sent to you, which one could assume the Sender was initiating a discussion and open to your opinion. Sadly, I recommend you proceed as though that is not the case. You know what happens when you assume?

I always jump at the opportunity to share the above video — and add some levity and humor.

When it comes to politics, most are just interested in making their opinion known. From what I see they do not care otherwise.

One concerned Netizen worried that if they did not Reply to All that the other recipients listed would believe, albeit incorrectly, that they favored the expressed opinion. Here again, I don’t believe you can change anyone’s opinion via an email thread.

Especially if the original Sender was clearly steadfast in their point of view. So, I wouldn’t worry what other recipients, especially those that do not know you, will think.

Silence does not necessarily mean agreement. There are many online, myself included, who ignore these type of forwards because of the potential problems replying can cause even with those you do know.

If you are asking yourself these questions, the Sender made two mistakes that we talk about on a regular basis. One, forwarding of political commentary is risky business because not everyone is going to agree with you.

Secondly, if everyone’s email address is visible in the To: or Cc: fields, the original Sender reflects a lack of respect for their contact’s privacy by exposing their email addresses to strangers. Especially strangers who may be diametrically opposed to each-other’s opinions. They should have used the BCc: field.

Because the Sender displayed a blatant disregarded for everyone’s privacy, does not mean you should email those you do not know with your opinion. You know, that old two wrongs don’t make a right thing? No matter how important you feel your opinion is. Don’t do it. You are better than that.

The proper approach is to only email the Sender your opinion, if you must. Even if that means you have to manually remove addresses from the To: field. Depending on the relationship you could also include a little comment that you would appreciate your email address not being exposed to strangers in the future.

Way back when, there were email lists where these type of discussions could be held based on facts and a sincere quest for knowledge. All involved had open minds, respected others opinions and would welcome additional information that could in fact alter their perceptions or points of view. Rare are the places where you can do this online in the year 2019.

In the case of forwarding political commentary, email etiquette dilemmas are created by those who do not realize the consequences of their actions. When this happens consider pointing the Sender to this site so they can at the very least avoid breaching their contact’s privacy moving forward. Knowledge is power after all. At least to some…

How do you handle politically charged emails that you didn’t ask for and disagree with?